It is probable that SARS-CoV-2 will be circulating during the influenza season 2020/21. This situation might result in a double burden of disease with both viruses spreading, causing similar symptoms. It is, therefore, crucial that we have plans in place to protect those at risk, prevent ill health, and minimize the impact on the health care system. A question submitted by the cantonal health authorities /GDK to the NCS-TF relates to this issue: “What is the importance of influenza vaccination concerning COVID-19?”.

Seasonal influenza isa challenge for surveillance, control,and treatment[1,2]. Worldwide, it causes 3 to 5 million cases of severe illness each year and kills from 250,000 to 500,000 people[3], particularly infants, the elderly, and the chronically ill. In Switzerland, influenza is responsible for 111,000 to 331,000 medical consultations yearly and 1,000to 5,000 hospitalizations[4].

Both influenza and COVID-19 are contagious respiratory diseases caused by viruses,and they share some of the same symptoms (e.g., fever, cough) and approaches to prevention (e.g., hand hygiene, staying home when sick, physical distancing, respiratory etiquette)[5,6]. Further,risk groups for influenza and COVID-19 are similar and include older adults and people with chronic illnesses (Table 1)[4,7–9]. There are also important differences:super spreader events are more common for COVID-19[10,11]; the infection fatality rate is higher for COVID-19[12,13],and transmission during the pre-symptomatic phase is considered more important for COVID-19than for influenza[2,14]. 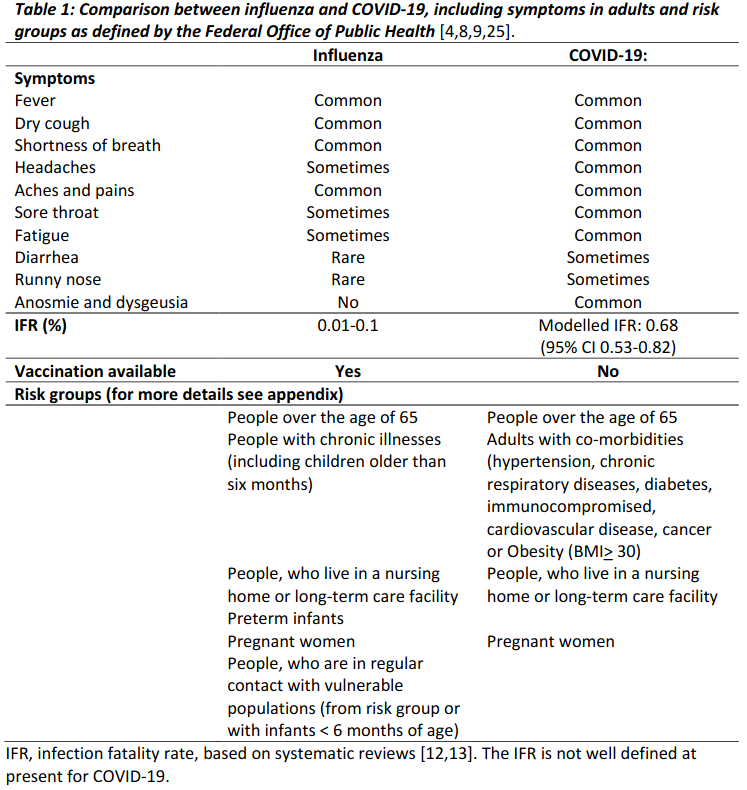 In the UK, the national vaccination programme for influenza based on an intranasal live attenuated influenza vaccine (LAIV) was extended to include healthy children and adolescents aged 2 to <17 years [23]. The programme’s positive impact on influenza-related outcomes has been documented, both in terms of providing direct protection to children and indirect protection to the wider population, including risk groups. Interestingly, beneficial effects were also evident in the 2014/15 influenza season, despite the circulation of drifted A and B influenza strains [24]. In the USA, several school-based influenza vaccination studies showed relative reductions in influenza-like illness in both children and adults, school days lost and in adult workdays lost [21].

COVID-19 will be circulating during the upcoming influenza season 2020/21. This situation might result in a double burden of disease with both viruses spreading, causing similar symptoms. It is, therefore important that we have effective plans in place for the 2020/21 influenza season to protect those at risk, prevent ill health, and minimize the further impact onthe health care system.

Influenza vaccination and recommendation by the FOPH

The Federal Office of Public Health (FOPH) has had influenza vaccine recommendations in place for many years. The recommended indications target mainly older adults, but also patients of any age with chronic illnesses (including children older than six months), premature infants, pregnant women, and residents in long-term health care facilities or those who are in regular contact with the mentioned vulnerable populations, including health care workers[4,9]. Importantly,in 2003, the World Health Assembly adopted a resolution urging member states to”increase influenza vaccination coverage of all people at high risk and to attain coverage of 75% among the elderly by 2010″[7].

Trends of influenza vaccinations status over time in Switzerland

The majority of the population remains susceptible to SARS-CoV-2, even in regions with a high burden of COVID-19 cases. For example, sero-surveys from Geneva showed a SARS-CoV-2 seroprevalence of 10·8% (95% CI 8·2–13·9) for their 5thstudy week in May 2020[35]. The stress on health care systems will be greatest should the COVID-19 and influenza epidemic overlap and peak around the same time.

A modelling study from China examined the impact of mass influenza vaccination on COVID-19 epidemics with limited detection capabilities [36]. The modelling examined the effect of mass influenza vaccination on the spread of COVID-19 should an outbreak coincide with the influenza season. The authors found that increasing influenza vaccine uptake or enhancing the non-pharmaceutical public health interventions would facilitate the management of respiratory outbreaks coinciding with the peak flu season. In particular, such an increase in vaccine uptake could partly compensate for the shortage of diagnostic resources.

In Australia,the COVID-19 related increase in non-pharmaceutical interventions (NPIs) such as improved hand hygiene and social distancing appears to have had a substantial impact on the mortality of seasonal influenza [37]. From January to June 2020, there were just 36 deaths from the flu, compared to 430 deaths in the same period in 2019. School closures and border closures probably also played a role in reducing influenza transmission.Similarly, in Singapore, influenza activity declined steeply following the implementation of NPIs [38]. The experience in Australia and Singapore shows that NPIs are effective measures to reduce transmission of both influenza and COVID-19.

The stress on health care systems will be most significant, should the COVID-19 and influenza epidemic overlap and peak around the same time during influenza season 2020/21. The majority of the population is still susceptible to COVID-19. Influenza and COVID-19 are difficult to distinguish based on clinical assessment[5]. A recent study[34]has shown that influenza vaccination coverage in Switzerland has decreased from 2012 to 2017. This decrease was also observed among those at the highest risk for influenza as well as COVID-19 (>65 years, chronically ill). Overall vaccine coverage among risk populations was 36.2% in 2017, well below the recommended WHO target.

We urgently recommend that strategies to increase the vaccination coverage for influenza are implemented for the upcoming influenza season. Strategies should target the risk groups for both influenza and COVID-19 as well as health care workers(Table 1).

Targeting children may reduce hospitalizations among adults who frequently contract influenza from children. However, this will be difficult to achieve in Switzerland in the short term. The general vaccination of children has never been recommended in our country, and the intranasal LAIV is not available. The NCS-TF believes that firm recommendations for vaccinating children cannot be made at this stage, but that the licensing of the intranasal vaccine in Switzerland would be highly desirable.

An important aspect is increasing access to influenza vaccination:

All strategies should integrate effective communication:

Finally, we recommend strengthening other fundamental elements, such as non-pharmaceutical interventions (NPI), in the prevention of influenza transmission. Most of these interventions have already been promoted at the start and during the COVID-19 pandemic:

In response to request from: GDK

As the Swiss National COVID-19 Science Task Force has been disbanded as of 31 March 2022, no further epidemiological assessments, scientific updates or policy briefs will be published in the future. All previous publications, pages and information of the Science Task Force remain available on this website.